At the recent RT Book Lovers convention in Chicago, I had the distinct pleasure of meeting, face-to-face, a person I've gotten to know and adore during the course of our on-line interactions. She's a fabulous author who's as sweet as she is gifted. I'm pleased to introduce you all to Katy Lee, and let you know all about her new release, REAL VIRTUE! 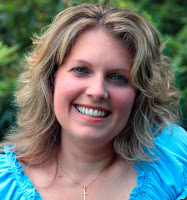 I wear a lot of hats. And I mean that in a figuratively sort of way. When I sat down to write this, I actually stumped myself on who is the real Katy Lee? Did I want to share about my role as wife to my helpful and handsome husband and mother to my three young children? Did I want to talk about how we fostered and adopted one of them and the whole process of that part of my life? Or maybe that I home educate them and love that I learn something new every day along beside them. Then I thought perhaps I should keep this more professional and talk about my joys of working in the church as a Children’s Ministry Director, where I get to share and simplify God’s message with His precious little children on a weekly basis, and also, where I am an inspirational guest speaker, hoping I encourage lots of people to find their God-given voices.

I have always been a closet writer. Secretly writing down the thoughts and stories stuck in my head, whether I jotted them down in spiral-bound notebooks or clacked away on my ancient typewriter, and then later on my laptop. I had an all-encompassing need to get them down on the page. Or I should say pages. Pages upon pages upon pages. But all those pages never left the closet.

Until last year when Melody Mesini started screaming at me that she better not get left in the closet like all those other characters who were still in there. Yes, Melody Mesini is my heroine from REAL VIRTUE. Her story needed to be told to more than just me. Hiding her in the closet would help no one. So I opened the door to let her out.

So, with my new hat on, I can say, I am Katy Lee, and I am a writer. But I think I just heard my kids calling. Someone is stumped on finding the area of a parallelogram. So for right now, it’s off with my writer’s hat and on with another.

Sounds like a wonderful life, regardless of how many hats you're wearing, Katy!

Let's give folks the inside scoop about your release, REAL VIRTUE! 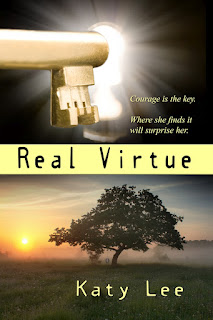 In a virtual reality game where she can fly, someone’s aiming to take her down.

Mel Mesini is a New York City restauranteur and an avid virtual reality world traveler. She's risen above her misfit life and now bears a striking resemblance to her glamorous, gaming avatar. But her successful life--both online and in reality--takes a swerve the night her father is seriously injured in a hit-and-run. Mel is careened back to her judgmental hometown, where being the daughter of the town's crazy lady had made her the outcast she was. To make matters even worse, Officer Jeremy Stiles, the man whose harsh, rejecting words had cut her deepest, is heading the investigation.

Jeremy knows he hurt Mel and attempts to make amends by finding her father's assailant. When he realizes she's the actual target, his plan for reconciliation turns to one of protection--whether she wants his help or not. What he wants is answers, especially about this online game she plays. Is it a harmless pasttime as she says? Or is she using it to cover something up? As a faceless predator destroys the things that matter to her, Jeremy knows he's running out of time before she loses the one thing that matters most--her real life.

“Well, hello to you, too, Jeremy.” The only thing missing from Mel’s Academy Award performance was the red carpet. When she had first laid eyes on him coming toward her, she felt as if she’d been sucker-punched.
Jeremy Stiles in the flesh. Her old friend—the only friend she had in this town. The very same man she’d trusted with everything, and the very same one who’d torn her heart from her chest and sent her running. Mel straightened, remembering she wasn’t that runaway anymore. She was a different person now. A better person.
Turning tail was not what Nails, her avatar, would do, and neither would she. She dug deep, pooled all her resources, everything she had in her, and laid it on as thick as possible. “Long time no see.” She hoped her lopsided smile didn’t ruin the effect.
“I’m sorry. That came out all wrong. You just look so different. I didn’t recognize you. I guess you just caught me by surprise.”
“Big surprise, I’d say.” His red-tinged complexion creeping up out of his navy blue collar spoke volumes. She tilted her head and leaned in. “What was that about you arresting me?” She waited for him to gush all over the new Mel Mesini so she could rub it back in his face. But instead, he squinted and kind of huffed. It could have been a laugh, but it wouldn’t be one she would consider jovial. More like confusion.
Harder. She had to try harder.
Jeremy raised his head toward the front door, causing the light to glint off his silky, sable-colored hair. Her fingers flexed of their own accord and she quickly clasped her hands together. “I’m sorry about that, too,” he said. “I thought you were one of the reporters.”
She followed the direction of his gaze over her shoulder, and when she swung back, she tossed her hair and picked up a strand of it to twirl. “I was actually a bit surprised to see them out there. What could they possibly want with this little Podunk town?”
His face fell.
Pain was not the response she’d been expecting, at least not yet. But she would take it. Score one for me. This was going to be fun.
He reached for her forearm, and she flinched. Having him touch her, however, was not the fun she’d had in mind. His hand dropped to his side. His ice-blue eyes, which still annoyingly haunted her dreams, darkened before her. The sorrow she witnessed in their depths struck her core, and she stepped back.
Why was he so sad? Had her remark really hurt his feelings? It wasn’t that mean. She’d only meant to show off her new look. After all, this was her “how-do-you-like-me-now moment” where Jeremy would see what she’d become, the one whom he had turned away. He’d been the one to reject her. So then, why was her chest tightening with guilt?
The joke was finally on someone else. Someone besides her. Now it was her turn to laugh. And if he wasn’t looking at her with those puppy-dog eyes and shoulders all slumped over, as though she had kicked him while he was down, she would have been able to carry this moment out as she’d always dreamed. So much for her day of reckoning. She couldn’t believe she was actually going to apologize, but the words began to form on her lips. “I’m sor—”
“They’re here for information about your dad’s accident,” he rushed out in the same moment.
Mel retracted. “My dad?” Her hand splayed on her chest with the painful reminder of why she was here in the first place. The real reason. And it had nothing to do with settling scores. An image of her father lying alone in a glass room of the ICU flashed in her mind. “Why do they care? Accidents aren’t usually big news.”
“No, you’re right, accidents don’t usually bring out the reporters, but hit-and-runs do.”
Her mouth dropped, and she snapped it closed. Hit-and-run? “You don’t know who hit my father?”
His eyes softened with more regret. “No. I’m sorry. At this point, we don’t.”
Her exhaustion had to be catching up with her because nothing he said made sense. She was running on empty, her double shots of espresso having worn off hours ago. With the help of Chris, she’d been able to change clothes, pack a few bags, and get on the road before sunrise. But that also meant she’d been up for twenty-four hours straight.
“I don’t understand. Someone just left him there to ...?” Her hand curled into a fist. “How could they do something like that?”
“I promise you, we’re doing everything we can to find—”
She swayed on her feet. In the next instant, Jeremy had a hold of her elbow. “Are you okay?”
She zeroed in on his hand where it now held her steady, touching her. Touching her! So why wasn’t she pulling away? Pulling away? She couldn’t even look away.
His hand seemed rougher than she remembered. His nails chopped and worn. They were no longer boy hands. They were larger, stronger, supportive. But yet, they’d always been supportive, hadn’t they?
She needed to pull away. The longer his hand rested on her arm, the more she remembered.
And the more she didn’t mind.~~~~

Great blurb and excerpt! Katy, thanks so much for dropping by the blog!