I always find it a delight to spend time with Pelican Book Group author Clare Revell.

She's an aficionado of suspense, and recent efforts of channeled that gift into the Christian Young Adult genre. I admire this effort, because to my mind, there's nothing better - and more important - than capturing the interest and hearts of young readers. They're our future, and they're smart. Here's what else: they know good books when they find them.

When Jim and Staci Kirk's parents go missing, he decides to search for them himself. Unbeknownst to him, his sister and their best friend Lou, stow away to join him.

It seems so simple on paper, sail from England to the Philippines and find the Kirks. But a hurricane named Erika and a relentless shark conspire against them to make the voyage one of the most perilous trips the teenagers have ever lived.

Can they endure the danger? Will they find the Kirks alive or does God have another idea in mind?

Lou heard a siren and turned to look behind them. A flashing light identified the fast approaching boat as police. Four armed officers stood on deck and the loud hailer instructed them to pull over.

"Do what they want."

"I have to." Jim began to slow the boat and moved it to rest at the side of the waterway.
The police boat shot past and one of the officers waved his thanks.

Lou released a sigh of relief. "For a moment I thought..."

"We all did," Jim said. He pulled out into the main waterway again and followed in the wake of the police boat.

"Maybe they’ve had lunch, and they’re off to kill the cook," Jim said grinning.

"There it is." Staci pointed. "It’s slowing down."

Suddenly an almighty explosion fragmented the police boat into a mass of flames and smoke. Shattered timbers and twisted metal flew everywhere.

What an amazing adventure. These three musketeers (well, four, really because you have to count that adorable dog Deefer) set out to sea with the noble intention of finding Jim and Staci's missing parents. Dealing with numerous perils along the way--I won't spoil with specifics, trust me, you'll want to read and take the ride along with them--they stretch and grow as individuals and in their faith, which is a wonderful aspect of Christian YA fiction. Revell always delivers on the suspense, and November-Charlie is no different, but I'm particularly impressed by the way she develops her characters and paints a very real portrait of YA life with all of its joys, insecurities, fears, sadness and overriding determination.

Clare lives in a small town in England with her husband, whom she married in 1992, and her three children. Writing from an early childhood and encouraged by her teachers, she graduated from rewriting fairy stories through fanfiction to using her own original characters and enjoys writing an eclectic mix of romance, crime fiction and children's stories. When she's not writing, reading, or sewing, she's keeping house or doing the many piles of laundry her children manage to make.

She has been a Christian for more than half her life and attends Carey Baptist where she is one of three registrars.

Connect with Clare at:


http://telscha.blogspot.co.uk/
Posted by Marianne Evans at 6:00 AM 2 comments:

Kathleen Friesen lives in the beautiful Okanagan Valley in British Columbia, Canada.
She enjoys reading, travelling, kayaking with her hubby (on calm waters only!), and spoiling their grandkids.

Kathleen completed her first novel, Melody's Song, a story of Redemption. It was published via WestBow Press and is available at all major online retailers or through your local bookstore.

Her second novel, Nila's Hope,is now available. The theme of this book is Release, the kind of freedom that only God can give. Harbourlight Books, an imprint of Pelican Book Group, is the publisher. 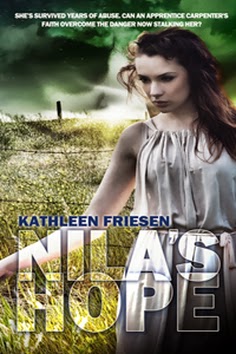 Just when her career as a carpenter and a relationship with Will Jamison are within reach, Nila Black’s abusive ex-boyfriend is released from prison. He’s out of jail, out for revenge, and making promises she knows he’ll keep.

Nila will do anything it takes to save Will and her friends from the evil that will come their way if she doesn’t put distance between them—even if it means abandoning her new-found faith. It will take a miracle and an angelic messenger to show Nila that God is her greatest protector. He has never left her side, and He wants only the best for her and for the man she loves.

A female carpenter (such an interesting twist!)...a vengeful and abusive ex-boyfriend...and the love of a lifetime. Can Nila and Will find a way to forever, or will evil and past pain shatter their dreams? Can forgiveness and redemption sing their song within two hearts scarred by fear and feelings of unworthiness? With a gift for page-turning suspense, heart-wrenching personal conflict and an exquisite writing voice, Kathleen Friesen hits all the right notes with her Harbourlight release, Nila's Hope. I look forward to her next release!


I hope you enjoy, and happy reading, friends! God Bless!