Tuesday's Child on Tuesday with the Fabulous Clare Revell!

It's always a great day of the week when Clare Revell stops by A Minute with Marianne! Why, you may ask? Because this talented author has crafted a book for each day of the week, based on the retelling of an old nursery rhyme. Tuesday's Child is now on book shelves, so let's find out more!

Clare lives in a small town in England with her husband, whom she married in 1992, and her three children. Writing from a early childhood and encouraged by her teachers, she graduated from rewriting fairy stories through fanfiction to using her own original characters and enjoys writing an eclectic mix of romance, crime fiction and children's stories. When she's not writing, reading, sewing or keeping house or doing the many piles of laundry her children manage to make, she's working part time in the breakfast club at one of the local schools.


She has been a Christian for more than half her life. She goes to Carey Baptist where she is one of three registrars.

Now, it's time to face the firing squad--better known as Marianne the Interviewer...

What inspired you to write this book? What drove its creation?

Tuesday’s Child was inspired by a prompt posted on the WRP blog – a child, a hat and a lightning storm. I’d also been watching a lot of Sue Thomas FBEye and wondered what writing a deaf heroine would be like. I did threaten to wear ear plugs in church, and despite getting Pastor James’s permission I didn’t do it.

I wake at midnight usually, get a couple hours in while there are no kids watching the TV. Though that doesn’t always work. Then up again at 6.30am for the day job (term time only). Home again by 9.30am and then write or edit until 3.30pm when the kids get in from school.  The word doc usually stays open til I finally crash about  9pm. I do housework, laundry, cooking etc in between, making sure I get up every half hour or so during the day.

When did you realize you were called to be a writer?

I’ve always written. Going from rewrites of fairy stories to fan fic to original characters in fan fic to what I do now. If I don’t write the voices in my head are almost overwhelming.

What are you currently reading?

Aww, Clare, thank you for reading Devotion!!!  ::blush::
What’s item number one on your bucket list?

I’d like to see Niagara Falls. I love waterfalls and went to an amazing one in Scotland in August. I’ve also seen a lovely one in Wales.

Finishing writing Sunday’s Child – the last in the seven book series. Then it’s on to the two WIP’s I have part written in notebooks.  Both set in my fictional town of Headley Cross. One deals with the radio station and the other with a children’s home.

Where and how can folks connect with you?

I’m in several places on line. 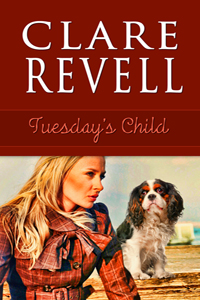 Guilty of love in the first degree, a deaf witness who 'sees' the murders and a cop torn between doing his duty and going out in faith.


Deaf from the age of five, Adeline Munroe operates a hospital for injured dolls, but lately her quiet life is disturbed by violent, haunting visions. Perhaps it's just her unspoken fear--a serial killer has struck in Headley Cross. But Adeline soon realizes she's seeing each murder just before they happen and reluctantly contacts the police.


Detective Sergeant Nate Holmes has enough to deal with between caring for his orphaned niece and his current assignment--the Herbalist killings, so when a woman comes forward who claims to be "seeing" the crimes in dreams, he isn't hopeful she'll be of any help. But he knows her from church, and she inexplicably describes how each crime is committed. Is God answering his prayers through Adeline?


Adeline assists the police, yet more women die and she becomes the prime target of the killer. Will Nate crack the case before the Herbalist can complete his agenda--or will the next murder Adeline foresees be her own?


All of Nate’s senses kicked into action, his copper’s antennae twitching.


She knew something, or at least thought she did.


Adeline sucked her lower lip into her mouth, worrying it with her teeth. “This is going to sound stupid, but…” She took a deep breath. “I saw them. All of them. They all had their hair tied back or up.” She picked up the top clipping. “She was playing on a swing and wearing a red jacket. This one was walking the dog and wearing blue.”


Nate jolted as if he’d been struck by lightning. Those details hadn’t been released. Was he wrong about her? Was she somehow involved with the murders? “Wait  a minute. How did you know any of this?”


Adeline carried on speaking as she shifted through the papers. “She was on her way to dance class in pink. This one was jogging in a gray toweling track suit and the first one…”

Nate put a hand on her arm, cutting her off.


She jerked her head upwards in surprise.

Enjoy, friends, and Clare, blessings to you, and much continued success!!
Posted by Marianne Evans at 7:57 AM 9 comments:

The Next Big Thing - Finding Home!

I was blog tagged by Lynn Willis who was invited to participate in The Next Big Thing! So here we go...the answers pertain to my soon-to-be-released Christmas romance, FINDING HOME (Pelican Book Group, December 2012) 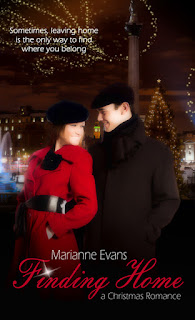 Where did the idea come from for the book? That’s easy! My longing to return to London! I’ve been twice, and both excursions were fabulous. I wanted to write about a Dickens-style Christmas brimming with tradition, love and beautiful surprises!


What genre does your book fall under? Inspirational romance


Which actors would you choose to play your characters in a movie rendition? Hmmmm…wouldn’t that be incredible?? I can easily see Charlize Theron as the sparky, yet vulnerable Alexa and John Cusack as the debonair yet spicy Peter Royce Colby…


What is the one-sentence synopsis of your book? Sometimes, leaving home is the only way to find where you belong.


Will your book be self-published or represented by an agency? Finding Home releases in December from the absolutely fabulous White Rose imprint of Pelican Book Group.


How long did it take you to write the first draft of your manuscript? Finding Home literally flew from my fingertips – I was so inspired and motivated to write a Christmas romance set in London! Additionally, it’s amazing with a deadline will accomplish…LOL!!!


What other books would you compare this story to within your genre? If you love Christian inspirational romance, I think you’ll adore Finding Home.


Who or What inspired you to write this book? I loved the idea of taking a bruised heart (Alexa) and mixing her life with that of a friend from her college days when she studied abroad in England. I adore London and look forward to returning to that magical city at some point soon – writing Finding Home satisfied my yen to hop the pond!


What else about your book might pique the reader’s interest? At its heart, Finding Home is a fun, frolicking, heart-felt romance. If you’re in the mood to take a brief break from the holiday settle back by the fireplace with a romance that will stir your senses and take you on a mini-vacation to England, I think this story is just the ticket (pardon the pun!!) Hope you enjoy!


Thanks so much for dropping by! Now, I’m going to pass the baton to these five great authors. I hope you'll check out their blogs, too.


Donna B Snow: http://donnabsnow.blogspot.com/
Tag, you’re “it,” ladies, and enjoy the pleasure of being “THE NEXT BIG THING!”
Posted by Marianne Evans at 6:30 PM 1 comment: