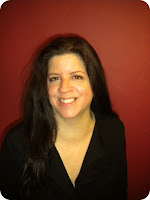 Dana Pratola makes a return visit to "A Minute with Marianne" giving us the inside scoop about her latest release, DESCENDED! Check it out!


He has no wings or halo, but he’s an honest-to-goodness hero. And his lineage is quite impressive.
When a reclusive businessman takes an interest in Haven’s artwork, she knows it’s an answer to prayer. But Jett Cestone is an enigma with a disconcerting connection to the young women in his employ. He’s by far the most unusual man she’s ever met.


Haven is the most interesting woman to ever cross Jett’s path. But she’s too naïve and pure to learn what goes on in his home. Too bad he wants her more than he’s wanted anyone or anything in his life.

Intrigued? Here's a blurb that's certain to pique your interest even further!

Haven was still thinking of Jett two hours later as she applied her makeup in an upstairs bathroom. Unlike the one in her room, this one had a large mirror that swung out from the wall.
"Why do you wear that stuff on your face?"
Haven's hand jerked, dragging a stripe of eyeliner across her temple. She ground her teeth.
“I apologize.”
“I could have poked my eye out! And you aren’t supposed to look in the bathroom when I’m in here.” She wiped away the smudge with a corner of tissue.
“These are not your quarters, and the door is open,” Jett answered. “So, why do you paint yourself up like that?”
“It’s a mask.” She threw the answer out flippantly, but knew it was the truth.
“What are you hiding?”
She shrugged. “I guess the real me, same as you.”
“You don’t hide the real you.” Annoyance tinged his voice. “You’re the most open person I’ve ever met.”
Haven set down the pencil and shifted her feet. “I’m sorry. I shouldn’t have said that.” He didn’t answer and she sighed. “I guess I wear it out of habit. Growing up, girls are told they need to be thinner, prettier, sexier. It sticks with you. The world isn’t a very encouraging place. I just want the outside to be more appealing.”
“You couldn’t be more appealing.”
She hesitated, blinking while her skin heated. “Thank you.”
Jett cleared his throat, evidently as surprised by the compliment as she. “So where are you going, if you don’t mind my asking?”
“A movie, then dinner. You know, traditional.”
“This is a date, then?” Bewilderment and a definite touch of hostility colored his voice now.
The guilt was back, the same niggling self-reproach she encountered every time she thought of Chris and Jett in the same timeframe. “Yes.”
“And is this the young man you were with the night Paris went missing? The charming Christopher Andrew Pembroke?”
Haven turned to see him, which of course she couldn’t. “Don’t you respect anyone’s privacy?”
“I’m concerned.”
“You’re nosy. You could only have found that out by poking your nose in where it doesn’t belong. He isn’t an employee. And how did you know his full name? I didn’t even know it.”
“There is much you don’t know. Shall I enlighten you?”
“Don’t you dare!” She jabbed a finger in the air. “And I mean it!” She took a deep breath, gripping the front of the vanity with both hands. “Is there going to be a problem if he wants to come in when he brings me home?”
“Problem?”
“Yes. You said I could have people here. Are you are going to behave yourself and keep out of my business?”
“What you do with your date is your affair. I won’t intrude.”
She smacked a hand on the counter. No matter what he said, she could tell his teeth were clenched. “You aren’t my guardian or my husband. You have no right to try to make me feel guilty for seeing a nice guy. I’m not going to sleep with him—and if I were,” she added quickly, “it would be none of your business. You and I are friends.”
“Is that what we are, Haven? Friends?” His words rang with a peculiar strain.
She swallowed. “Sure.”
“Very well. But if you think you can feel free to express to me your desire for another man, I hate to disappoint you. Our friendship will never extend that far.”
Emotions were escalating, his and hers, and she seemed unable to help it. “Great, just great.” She should shut up, but she shouted instead, arms flailing. “A friendship with conditions. Great. Tell you what? Why don’t you take your friendship and—”
“Ah, ah, ah. Don’t say something you’ll regret.” His voice held a clear warning.
Haven stopped and dropped her hands in surrender. “You’re right. So with that in mind…” She swung the bathroom door closed with a satisfying bang.


Want to know more about Dana Pratola? After that excerpt, I don't blame you--so, here you go!

Jesus Christ is my Lord and Savior. He is merciful and gracious and loves me beyond all human reason. He’s blessed me with a wonderful husband and three dynamic kids, and we all live in a shoe in New Jersey. (Just seeing who’s paying attention, lol)

God gave me a passion to write Christian Romance. Not the kind with a woman buttoned to the neck and a man daring no more than to hold her hand, but the contemporary kind. These books don’t contain explicit sex scenes, but my characters have real desires, struggles and choices to make.  A lot of the time they make the wrong ones.  No subject is prohibited but good always triumphs.

Thanks for visiting, Dana, and God bless!! I can't wait to dive in to DESCENDED!!
Posted by Marianne Evans at 10:12 AM 7 comments:

I'd like you all to meet Kathryn J. Bain - an author of incredible Christian suspense with Harbourlight Books! Be sure to drop a comment - Kathryn has graciously donated an e-copy of her new release, Catch Your Breath to be awarded to one lucky commenter!!

Kathryn J. Bain has been writing for over ten years now. She has two daughters, one a professional photographer, the other a student the University of West Florida. She is the President of Florida Sisters in Crime and the Public Relations Director for Ancient City Romance Authors.

She enjoys critiquing for the new members of American Christian Fiction Writers. To survive and pay bills, she has been a paralegal for approximately twenty years and works for an attorney who specializes in guardianships, probate, and estate planning. She moved from Idaho to Jacksonville, Florida in 1983 and has lived in the sunshine since.

Now that you know the basics, let's get to know her even better - and discover the inside scoop about her writing career!

What inspired you to write Catch Your Breath? What drove its creation?

Catch Your Breath is actually the sequel to my first book Breathless. That particular book was inspired by the Toby Keith song "God Love Her". I liked the idea of the Bible on the motorcycle so much, it became a whole book.


What’s a typical writing day like for you?
I get up at 5:30, exercise, shower, and then write from about 6:30 – 7:15 a.m. I work as a paralegal during the day but when I get home, I do things regarding my writing, i.e. marketing, revisions, etc., until 7:00. I then take the rest of the night off and read or watch TV. My writing time ends when Judge Judy comes on.

When did you realize you were called to be a writer?

About ten years ago as I was watching something on television, I thought that I could do better shows. I kept getting ideas so I started writing them down. When I first wrote, it was a screenplay, but I discovered you really had to live in Los Angeles to make it. I like Florida and didn’t want to move. Then I decided to do children’s books because it shouldn’t be too hard to write thirty pages. I got a big lesson there. Finally someone said to write what you read. I love suspense and mystery. And here we are today.
What are you currently reading?

I want to go to the PBR (Professional Bull Riding) championships in Las Vegas. Love those cowboys.

Chocolate, ice cream, cookies. And if you mix it all together, it’s really comforting.


What’s coming up next for you?

I have a book titled Beautiful Imperfection that should be coming out next year. In that book, my heroine is dealing with the aftermath of breast cancer and a killer.


Where and how can folks connect with you?

My website is http://www.kathrynjbain.com, or you can e-mail me at bainwriter@comcast.net. I’m also on Facebook at https://www.facebook.com/pages/Kathryn-J-Bain/248456325239552?ref=hl.
Stop by and friend me. I always have a giveaway when a new book comes out. 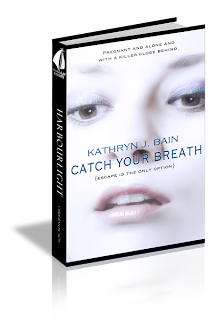 So, now that you've met this charming and talented lady, are you ready? Here's a glimpse of her new release, Catch Your Breath!

Calley Regan only wants to get through her cousin’s bridal shower without anyone discovering her secret—she’s pregnant. Her sanctimonious family would never understand. Then the one person she confides in happens to tell the incredibly handsome, but seriously uptight, sheriff, Riley Owens—who’s just given her a speeding ticket! How can she trust the brooding, inflexible lawman when he’s everything she’s not?

Riley Owens is instantly attracted to Calley Regan, but it won’t come to anything. For years, he’s lived mired in guilt, and carefree Calley is his polar opposite. But, when someone attacks Calley, Riley is determined to protect her no matter what it takes, and when her family deserts her, he takes Calley into his home. Years ago, he couldn’t save the woman he loved. He’s not about to let that happen again.

Kathryn, thank you so much for being my guest, and good luck to those visiting today - you'll be entered in a drawing to win an electronic copy!

Blessings!
Posted by Marianne Evans at 9:10 AM 14 comments: