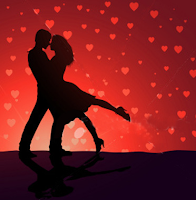 Megan Deitchler, step right up and enjoy the fun! You won the drawing for a personally autographed, print copy of Hearts Communion as well as a $15 gift certificate to Pelican Book Group  ( www.pelicanbookgroup.com )  I hope you enjoy the book and the shopping spree!!

If you didn't win this time, don't feel bad. Beautiful Music releases in just a few weeks - on March 8th - and I'll sponsor a similar reader-lovin' contest then!! So, stay tuned, and thanks as always for your support and encouragement!

Step up to the counter, take a seat and I'll have the waitress pour some coffee while we chat about Search and Rescue.

I've always been fond of family-owned, mom-and-pop style eateries. Setting a series of inspy romances in a time-honored diner located by the Detroit Riverfront speaks of all things cozy and loving. The idea appealed to the foodie in me, and the result is a four-book series from Pelican Book Group called, you guessed it, Sal's Place.

Search and Rescue has just debuted, and I'm dying to give you all the details so you can join the journey ~ I hope you love reading these stories as much as I loved creating them!

So, make yourself at home! Enjoy the blurb and excerpt. Leave me a comment, with e-mail contact info - and you'll be entered to win a $15 gift certificate to Pelican Book Group as well as a personally autographed, print edition of Hearts Communion, Christian Small Publisher Book of the Year in Romance! Winner announced, appropriately enough, on February 14th - Valentine's Day!!! 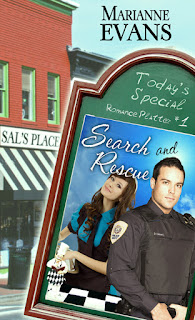 Jennifer Foster isn’t one for fairytales. As a source of emotional support for her troubled mother she doesn’t have time.Grounded in the practicality of living day-by-day, the tenderhearted waitress loves to swap food and affection with the regulars at Detroit's legendary diner, Sal’s Place.

When a robbery at the diner sends her life spinning into the capable arms of a Detroit Police officer, Ryan Douglas steps to the forefront of her life, whether she's ready to accept his loving care or not. But Ryan contends with his own set of family difficulties and circumstances that just might overwhelm their fledgling relationship.

Will the blending of their lives, and the love they feel, bring about heartbreak, or will God’s ultimate plan be allowed to play out, and bring them both to a point of acceptance, and love’s embrace?

“Hey, Sal, Mrs. Peterson’s sending back her order of spaghetti.” Jennifer Foster put a touch of spin on the rejected plate when she slid it across the metal dividing shelf between the kitchen and service areas. “She says she wants her noodles al dente.”

Sal Cocossa scowled. He planted his fists on hips covered by a speckled white apron. “Seriously.”

“She called it a pile of mush, but go easy. She’s having a bad day. Mr. Peterson’s back in the hospital.”

Sal’s expression immediately eased. “Is it his heart again?”

"For the past couple minutes. Poor thing. She’s pretty much a wreck about it.”

“Fifty years of marriage tend to act on a person that way.” Sal gave a nod and returned his attention to the stove, sliding and jiggling a sauté pan full of caramelizing green pepper and onion, a generous heap of crumbled, homemade sausage, and diced garlic cloves. “I’ll take care of the replacement.

Jennifer adored sixty-year-old Salvatore Cocossa, III and let him know it in the way she fluttered her lashes and smiled into his eyes. “Thanks, boss. Let’s give her al dente…and hope she doesn’t dente her teeth when she crunches into it.”

The quip inspired a spontaneous burst of Sal’s rich, chesty laughter. The reaction warmed Jennifer through.

A moment later, Sal called out the new spaghetti order then scooped up a whisk and lifted a metal bowl, scrambling up some eggs, back to work in the kitchen—master of the legendary diner, Sal’s Place.

Sal’s Place was an old fashioned, family-owned diner located on the Detroit riverfront. The restaurant had claimed its spot on the roadmap of Motown ever since the roaring twenties. Back then, Sal’s great-grandfather had opened and operated the restaurant. In those days, the juggernaut that was the industrial age had lifted Detroit to greatness and times weren’t just good—they were spectacular.

Jennifer’s glance touched upon black and white photos that chronicled the history of the diner. After ten years at Sal’s Place, she knew them by rote. The visual timeline crossed the walls like a history quilt. Her subsequent glance through the windows of the eatery told a much sadder story. Decayed buildings were barely lit against a fast descending early-autumn evening. Intermittent headlights from infrequent cars flashed against dingy bricks; some of the masonry was decorated by graffiti. To say this proud, tough city had fallen upon hard times would be gross understatement.

Battling a swell of sadness, Jennifer pulled away from the blight and returned her focus to the warm, bright atmosphere of the diner. She thought about Mrs. Peterson and sadness turned into compassion. The food at Sal’s Place was top rate; Jennifer knew there was nothing wrong with Sonya Peterson’s order, but she also realized the overburdened, elderly woman had suffered much lately. Sonya needed understanding—and a healthy dose of good fortune. Jennifer knew the feeling, so she championed the idea of cutting this warmhearted regular a bit of slack for ornery behavior.

Awaiting the new plate of food, Jennifer took in the crowd. She checked the lineup of full tables on this Saturday night. There were plenty. Then she automatically tracked back to the front door, where a line of customers were queued to be seated. The place was jumping.

She took note of two uniformed men standing at the head of the line. Glimmering silver chest badges identified them both as members of the 3rd Precinct of the Detroit PD. They were vaguely familiar—semi-regulars. Being a hometown girl, Jennifer knew there was no more gritty form of serve and protect imaginable. Crime prevention—in downtown Detroit? Her problems amounted to nothing by comparison to what these men must witness each day. Her pulse quickened in automatic reflex. Talk about nobility in the face of daunting odds.

Besides, what was it about a handsome man in a uniform?

One in particular captured her focus and held it fast. He was the taller one, who sported the stripes of a Sergeant, short raven hair and a strong, solid build. He looked her straight in the eyes then quirked his lips in a deliberate form of acknowledgement. The reaction left Jennifer to wonder if he hadn’t somehow heard the exchange with Sal.

Her brows furrowed and the striking, mahogany-eyed man gave her a nod. Something in the undercurrents of that innocent moment left Jennifer acutely aware of herself. She flushed head to toe beneath his lingering regard and promptly looked elsewhere. Snagging a coffee pot—decaf due to the time of day—she prepared to make the rounds and return for Sonya’s plate once Sal called her table ticket. It’d be best, she figured, to move on to more worthwhile pursuits than ogling.

Still, while she moved through the restaurant, Jennifer watched Celia, their long-time hostess direct the two officers toward a booth. Sure enough, they ended up at one of Jennifer’s stations. Expectation danced along her nerve endings. Determinedly she doused that reaction and clutched the handle of the steaming glass carafe. Heat stemmed from nothing more than a temporary flame of infatuation, she thought, a headiness derived from the impact of a crisp, royal blue uniform. Or, maybe it was all that tough muscle juxtaposed against those warm eyes and that soft, knowing smile…

The officers sat. When the object of Jennifer’s admiration happened to look her way, she caught her breath and spun away fast, grateful she didn’t believe in mental telepathy. Strangely enough, though, being watched by the man left her feeling as though she had landed dead-center of VIP radar…if only for a moment or two.

Well, she thought ruefully, so much for not ogling.

Intrigued?? I sure hope so! Here's where you can find Search & Rescue: 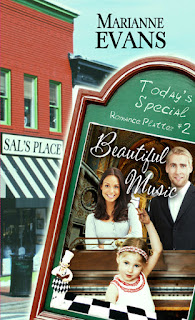 Blessings, friends, and thanks for letting me share my joy!
Posted by Marianne Evans at 9:39 AM 24 comments: