Oh, the glamour of business travel... 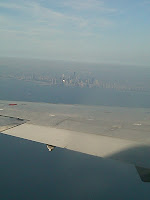 I'll be the first to admit it. When I hear about friends and colleagues who jet off to big cities on business trips, there's a part of me that thinks:"Gee. How fun. How glamorous..." You fly in, check in at what will most likely be a very comfortable hotel, accomplish some business goals, have a nice dinner, mix and mingle with people you may have only known through cyberspace or phone calls...sounds good right?
Sure it does.
Let me share the 'glamorous' story of my recent business trip to Chicago.
My plane departed at 7 am, so I arose at the horrific hour of 4 am to be sure I got there on time. Delays in getting a shuttle from the parking area to the terminal ate up a bit of the extra time I had built in, but no worries. Until I checked in at security, that is.
The 7 o'clock hour heralds the first morning flights to most major cities along the east coast from Detroit, so security was an absolute madhouse. After an hour in line, and a mad dash to the gate, I boarded the plane. Just barely.
Arrival in Chicago was uneventful, and actually quite fun, as the city skyline came into view. I had met up with a colleague from Ohio and we made our way to the Midwest headquarters of our company. We checked in at the security desk of the office building, and that's when problem number one came up. I lost my drivers license.
I had it when I went through security, and I slid it into my tote bag after that, so all I can figure is it came out when I was reading a book on the plane and I didn't even realize it.
Frantic calls to the airport, to the TSA, offered up only voicemail recordings. I finally connected to a human being who told me the documents I'd need to get home the following day. He also warned me to be prepared for a "slightly longer security check" on departure. Fine, I thought, as long as I get home. 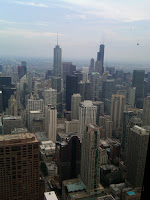 Issue settled for now, I met up with my colleagues for - yes - a very glamorous dinner at the Signature Room, on the 95th floor of the John Hancock Building. Outstanding views!! Wonderful atmosphere and food! After that, I literally sank into bed and was out before my head hit the pillow.

The next day we concluded our business activities and headed to the airport with plenty of time to spare (and get me through security without a photo ID...!) It only took an extra 15 or 20 minutes, and I had plenty of time, but the TSA team was thorough. They opened and searched my overnight carry-on. They emptied and searched my tote and purse, and even took apart my phone. They were nice, but very businesslike. And, since I had nothing to hide and was very eager to simply be aboard my plane, that was fine by me. I didn't even object to the full pat-down in the plexiglass security/holding pen...
However - I shouldn't have been in such a hurry.
I boarded the plane, pulled out my book to read (after making sure nothing fell out! LOL!) and the crew buttoned up the aircraft and we pulled away from the gate.
And stopped.
The captain came on, informing we were under a full ground stop at O'Hare due to severe, late afternoon storm systems moving through the Midwest. We'd be stopped for, at minimum, an hour and a half, but perhaps as long as two and a half hours. A sense of claustrophobia set in almost instantly. They kept the air running, but it wasn't very cool, and we were asked to close our window shades to further aid in keeping the cabin cool. Mid-July in the Midwest is typically humid and sunny - and late afternoon storm systems like this happen frequently - but I couldn't get over the idea of feeling trapped, and hemmed in.
I worked hard to distract myself with e-mails from my BlackBerry, reading, chatting with my seatmate, I even tried to write, though, to be honest, though I had a scene idea in mind, I just couldn't focus to that degree.
Thankfully after an hour and a half on the tarmac, we were cleared to take off. Just less than an hour later I was back home - drained and exhausted and eager for nothing but comfy clothes and fresh, cool air!! Added bonus? I had a trip to the Secretary of State in my future!
It sounds horrible - and, yeah, parts of it were, but it was also beneficial to me, fun, and just a small taste of that glamour I always thought about when hearing about business travel. Now, however, I understand more clearly when those who travel frequently on business tend to warn: "It's okay - but it's not as alluring as you'd think."
Be blessed everyone - and see you next time!
Posted by Marianne Evans at 9:01 AM