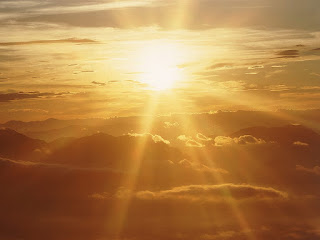 This is going to be a long, though I hope cohesive, and absolutely from the heart blog.

I'm curled up on the couch, my laptop humming after a Thursday night and bulk of my Friday spent celebrating what I feel is life's most precious gift. The overwhelming grace and beauty of my salvation through Jesus Christ. I'm Catholic, so the end of Lent is now just hours away and so many feelings and images swirl through my mind right now.

Humble service (our Lord washing his apostle's feet), accepting the will and mission of God (“Your will, not mine, be done...”) a heartbreaking, physically debilitating journey, laden by a cross beam, down Jerusalem's Via Delarosa, a sinner's death, on a cross, hanging in shame for the sole purpose of redeeming mankind...

I bring this up not just because it's Easter weekend, and the holiest three days of the calendar. I bring this up because I have tremendous call on my heart right now to fight back against what the current President of the United States and the popular media has to say about Christianity and its waning influence on Americas and, thereby, America culture during this sacred time in our year.

According to Obama, the United States of America should no longer be referred to as a Christian nation.

Then there’s Newsweek, publishing an article this Holy Week citing declining church attendance and a Western European style secularism to highlight its point that we are at "The End of Christian America"

According to Newsweek, churches are suffering. Why, the article states at one point, in such tough economic times, aren't people turning to God? The article also sites trends toward a more “enlightened” pattern of embracing “spirituality” - and the idea of “all Gods.”
Please don’t tell the people coming to our church doors at Guardian Angles in Suburban Detroit, that they don’t need God, or that they aren’t turning to God when they receive warm clothing, food, and most importantly, the loving embrace of our faith community! I doubt they’ll pay you an ounce of attention.

I’m tired of seeing that which I hold most honored and holy being trashed. So, I’m taking a stand, here and now, and I’m speaking up, refusing to be rolled over in silence because of faith and beliefs I hold sacred. There is no such thing as “all gods” or a cop-out expression of saying you’re “spiritual” versus being “religious” – what that translates to as far as I’m concerned is a lazy form of faith living with a lack of commitment to standing by what you truly believe.

Here’s what I believe, and will stand by forever: Jesus Christ is my Lord, Savior and Redeemer. I am a Christian, I am a sinner who keeps on sinning, but also keeps on trying, and keeps on looking to Christ for forgiveness and the strength to continue on. I’m a humble servant of my home, my community, and my world because that’s the pattern of living my faith in Christ has shown me to be most authentic and satisfying.

I don’t preach, or serve, in order to ‘earn’ heaven, either, so none of that nonsense. I couldn’t earn heaven with a million lifetimes. Heaven was gifted to me through one thing: Jesus’ life, death, and resurrection. He did that. For ME. For YOU. For the WORLD – and he’ll always take you in, no matter what you’ve said, what you’ve done, or what you’ve believed prior to discovering the truth of his grace, mercy and all encompassing, unconditional love.
He is God’s Son. He’s pure and faultless – and he belongs to us all – if we accept him and invite him in.

Christ lived, ministered and died. He did this in fulfillment of God’s will. He endured crucifixion in order to bring a bring a flawed (and I suppose I'll now also say malleable) humanity back to His fold of love, comfort and peace.

Christ's life is on-going (remember that – on-going!). His mission continues on through to this very moment in time in the living, breathing echo of a life and death that took place nearly two thousand years ago. This authenticity and truth cannot be faked. Look at the mission work, the benefits provided, by those who work in His name.

I watched a PBS documentary years ago about the topic of Christ’s life and death wherein a learned professor and theologian made a comment that has stayed with me every since: “Believe, or don't believe. That's everyone's individual choice. But something happened that day. If not, Christianity would have died out perhaps just a few hundred years after His death.”
Almost two thousand years later, it has not. Believers remain, live, work, minister, and have faith. And they will continue to do so for thousands of years to come.

Obama is trying, almost desperately it seems to me, to create as many avenues away from the heart of what founded our nation as possible. I’d like to ask him: What is wrong with Christianity? Why is he so frightened by a group of people working for the betterment of their lives and the communities in which they live – the world they inhabit?

Additionally I would have to ask: Does tolerance and this call for politically correct, offend no one, ever, unity only include those who believe what he says we should believe? It seems that way to me. After all, Christian beliefs and views don’t have any degree of acceptance and respect from Obama and his terrifyingly extreme left-wing administration.

Obviously Obama’s comments and the Newsweek article upset me tremendously at first. They are the embodiment of all that I would most stridently fight against. For a while I felt hurt, and I railed about the topic with a good number of my Christian friends who made comments like:

'I'm sick of being marginalized.'

'Too many people are afraid to speak up for their faith and beliefs.'

'Christians who live and speak their beliefs are labeled as bigoted, racist, homophobic anti-woman, anti-choice zealots. I believe it's part of an agenda to try to make Christians the fringe. Not acceptable.'

All of this, sadly, is so true!

But then came this observation from my husband:

‘Back in the 60's, the media came up with the same kinds of stories. “God is Dead” was actually a headline. And he's not dead yet.’

Thanks, honey. That’s so true. And spending quality time in within the embrace of my faith community at Guardian Angels Church helped sooth and assure me, and it affirmed my goal to keep fighting the good fight. If I may, here are a few things I’d like to share after our services this weekend:

Holy Thursday Service:
We participated in a beautiful mass emphasizing humility. Humility and service to one another, our communities, and those most in need. Emphasizing action with words, close to one hundred people came forward with their Lenten alms and offerings such as clothing and food basket items (these kinds of donations – badly needed here in Metro Detroit – take place every week during mass, and are deeply needed). This generosity also takes place despite a wickedly difficult Depression that has settled over the state of Michigan. Depression – not Recession. Michigan passed that yard-marker years ago. Parishioners remain self-sacrificing enough, however, to bring about a greater good – not in order to be seen as holy, or proud – but simply to help our fellow man. It’s what Jesus would do.

Stations of the Cross & Good Friday Service:
Members of our parish spent almost a half hour streaming forward to venerate the cross of Christ and receive communion. Several moments stick with me about the service:

But what brought me to tears during Good Friday mass? The conclusion of the passion play. As our youth group carried “Jesus” from the cross they sang a combination of “Prepare ye the Way of the Lord” and “Long Live God.” It was affirmation to me, and a call to arms.

God is real. God touches people. Faith in the redemption of his son accomplishes miracles every day.

In the end, after enduring the foul taste of that derogatory article, I found myself more than able to walk that pathway to Calvary and celebrate my Christian faith with a solemn, grateful, and humble heart.

Evil won’t win, and God cannot and will not die. His battle against darkness has already been won.

To that, I can only add a simple, and heartfelt: “Amen.”

Happy, blessed Easter, everyone. He is Risen!!

Posted by Marianne Evans at 2:38 PM