The Women of Valley View are back, so I'm welcoming author Sharon Srock to the blog once again. I'm eager to check out this new release and discover what's new with Sharon - this gracious author has even offered up a print copy of Terri to a lucky commenter, so leave us some love and your e-mail address so we can reach out to you if you win!

Sharon Srock lives with her husband, Larry, and two dogs in Rural Oklahoma. She is a mother, grandmother, and Sunday School teacher. Sharon has one and three-quarters jobs and writes in her spare time. Her favorite hobby is traveling with her grandchildren. She is a member of the ACFW and currently serves as treasurer for her local chapter.


Sharon, do you recall how your interest in writing originated?


I’ve always been a reader. I NEVER had any desire to write, but God had other plans for me. So, the interest comes directly from Him. I’m waiting to see where He takes it.


What books have most influenced you?


I’ve had a library card for as long as I can remember. As a child I was more interested in the next book than the next…anything. I don’t think I can narrow fifty years of books to a specific set, type, or author. As a child I read just about anything I could get my hands on. I had my Trixie Beldon years, that graduated to Ms. Holts Gothic romances in mid high, Straight romances as a young wife and mother, I had several years of Horror novels, a decade or so of Science fiction/fantasy, heavy on Star Trek titles, Now, mainly court room drama and romantic suspense when I have time to read.

What book are you reading now?


What are your current projects?


Pam, the third book in the Women of Valley View series is at my publisher for consideration. I am furiously writing the fourth book, Samantha.

Is there anything you find particularly challenging in your writing?


I’m a bit of a perfectionist. I try to write it right the first time, instead of just getting the story on paper first and fixing it later. It slows me down since I try to re-read the whole thing everyday before I add new lines and pages. After I have 50 pages or so, the writing seems to progress much faster since I don’t have time to reread.

Is there a message in your novel that you want readers to grasp?


The importance of dreams, and the importance of NOT putting those dreams in front of what God has for us. If God has given you a dream for your life, He’ll get you there if you give Him control. Just because the route He takes is different than yours doesn’t mean the destination isn’t the same. Did you learn anything from writing your book and what was it?


OH, yeah. I’m Terri in most of the book. I saw so many parallels in her confusion over where God was taking her and where she wanted to be with my life in the early writing and my questions about this  being God’s will for me. Most of Terri’s prayer’s are mine as I wrote.


What were the challenges (research, literary, psychological, and logistical) in bringing it to life?

You know, writing Callie’s story was a challenge for me in so many ways. Pam’s story was an emotional challenge because I’ve had a lot of the feeling she’ll deal with in the third story. Aside from the introspection mentioned above, Terri’s story was pretty easy to write.

Do you have anything specific that you want to say to your readers?

To repeat the most important point-- If God has given you a dream for your life, He’ll get you there if you give Him control. Just because the route He takes is different than yours doesn’t mean the destination isn’t the same. 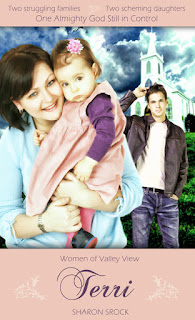 Despite a bustling day care center and a new foster child, Terri Hayes hungers for a family of her own. Then a plumbing mishap leaves her homeless and questioning God’s plan. Steve Evans’s gracious offer of his basement apartment as a temporary solution is an answered prayer.
Steve is a successful writer and a good father, but Terri is horrified when Steve’s book research leads him to a harsh confrontation with the parents of her foster child.  She needs to distance herself from Steve, but her efforts fall short as his two scheming daughters plot to make Terri their new stepmother.
Will harsh words and sneaky plans drive Kelsey’s family further apart and put a wedge between Terri and Steve? Or does God have another plan in store?
PURCHASE LINKS: