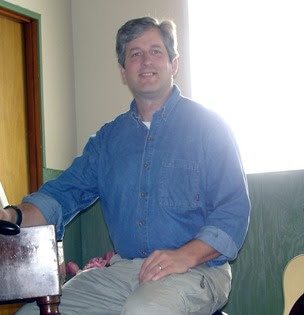 Welcome to A Minute with Marianne, Michael Duncan!

Michael's book, Shadows, is one of four debut titles that mark the launch of Harbourlight Books. I'm delighted to help spread the word about this fascinating and very special offering.

Michael has spent more than 20 years preaching and teaching God's Word. After serving in the U.S. Air Force, Rev. Duncan entered into public ministry and has served in four churches. He currently resides in Washington State with his wife and three children and serves as pastor. When Michael is not preaching or teaching God's word, he spends time writing. His first novel, Shadows, will be released in October, 2011. He is an apprentice-level alumnus of the Christian Writer's Guild. Michael is also a member of the Northwest Christian Writers Association and serves as a board member and a critique group facilitator. Given the opportunity, he also enjoys time on the golf course.

A stolen text...When the Book of Aleth is stolen, Aaron, captain of the Royal Guard 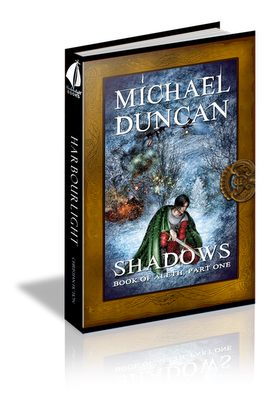 , is ordered by Emperor Therion to reclaim the ancient tome. The mission thrusts Aaron into a world he's never known--a world of elves and dwarves, races long thought extinct; a world where everything he has known and believed is a lie. A secret past... Forced to challenge his long-held beliefs, Aaron and his companions, two soldiers of the Royal Guard and two men of the Dwarvish kingdom of Brekken-Dahl, set out on a quest to recover the Book. Aaron resolves to discover the truth, and rescue the empire he is sworn to protect.

The Coming of Darkness

He stood alone. As the Usurper’s army approached, the tall, solitary figure kept silent vigil outside the high-walled city of Charis, the last free city of the King. Captain of the royal army, Protector of all Celedon, the lone warrior positioned himself like a bulwark between the unbreached gates and the Usurper’s evil horde, determined to stop the tide of vile creatures that continued to advance. At his command, those who remained faithful to the King waited within the protective fortress leaving him to face the enemy alone. He gripped his sword. Cold steel flashed with brilliance as the silent warrior waited. A halo of emerald light radiated from a small gem in the hilt and surrounded the protector.

A gentle summer breeze drifted across the vale, but it carried no scent of hope, only the half-dead stench of the Usurper’s army. Miles beyond the walls, the ancient forest burned unabated and belched thick clouds of smoke high into the air. Acrid smoke darkened the sun and shadowed the world in a ghastly twilight as embers drifted like snow from the sky. Thousands of vile creatures and traitorous men marched against Charis. Their approach echoed like thunder across the valley and shook the ground with every step. Through the haze and smoke, the Protector saw the Usurper, mounted on his black steed on a small hill behind his forces.

An explosion of fire shook the ground. The Protector stumbled to his knees and gazed upward at large daemons soaring through an ash-filled sky. The dark, leathery-winged creatures hurled flaming spheres at the lone defender. Each ball of fire burst in a violent detonation that shook the earth, but the sword he held radiated even brighter, its emerald glow thwarting every attack. No magic could penetrate the radiant circle of light. Undaunted, Celedon’s captain rose to his feet and held his ground.

The Protector’s heart raced with anticipation. In his steeled eyes, a fierce anger burned against the Usurper. He knew that his greatest challenge drew near. He suffered no fear, but hungered with the desire to avenge himself upon the hosts of evil. He knew his duty—to protect the King and defend Celedon, and at that duty, he believed he had failed. He thought of his wife and son and all those who remained inside, of those who stood loyal to the King. He gazed back toward the last, great city.

The high, granite walls of Charis guarded the hosts of those loyal to the King. Atop the battlements, the Protector saw archers of the High-Born elves, vigilant and ready to defend the city. The tall, oak gates at the center of the city wall remained closed. Along the ramparts, flags displayed the crest of the King of Celedon and fluttered in the breeze. Beyond the massive wall, in the midst of Charis stood the Tower of the Wind, a regal spire of white marbled stone. It shimmered in contrast to the black curtains of smoke. The Protector gazed up to the pinnacle of the tower where he saw a rampart and upon the rampart stood the King.

Ingrigued? Then join in the fun! Michael is sponsoring a contest to win an autographed copy of his book! Here's where to go to find out all the details and enter: